The twentyone year old man gets home and hears his father calling erratically. Once he follows his father's voice and locates him in the kitchen, it is already too late. His father is heaped on the floor in an unconcious state. The young man runs to call his mother, who's shopping in town, completely unaware of the tragedy that's taking place at home. She drops her would-be purchases and calls a friend to drive her home as she knows she's unable to safely drive herself home, after hearing the news of her husband's collapse. Little does she know her husband is not only unconcious, he's actually dead.

In just a few seconds, a whole family's life changes forever. The two sons are fatherless, the wife suddenly a widow. And it is not only the family that is affected, by Thursday morning, all his work mates will come to realise what happened that eery afternoon dated 090909.

The news reaches us today, on All Hallows Eve: our good family friend, known to us for about 23 years, and in recent years my brother's colleague, died so suddenly, unexpectedly from a brain hemorrhage on his kitchen floor. His wife cries to my mother, wishing my mother were with her in Sweden as she does not know how she will cope another day.

Already before I heard the news I had decided to abandon Halloween celebrations and rather light a candle for those who have passed on. However, the heat and Labone power cut, stopped me from getting my matches out. Well, if I were to light a candle, today it would be burning for you, Åke. Rest in Peace. 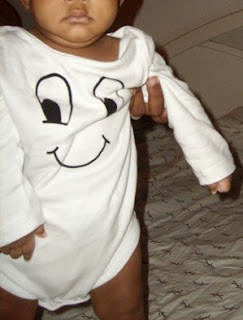 To the rest of you, happy halloween from my own friendly ghost!
Posted by Maya Mame at 23:54

Such a sad story. I feel for his family. Reminds me of when my dad had his heart-attack. Thanks to God he is alive and well and I pray nothing like that will ever happen again. How are you and your child? I missed you coming back to Ghana. How long did you actually stay in Sweden?

I know, it's awful! Glad your dad is ok, hopefully the worst is over.

We are doing very well, were in Sweden for five months, then spent a month in London and got back to Ghana early September. It's so good to be back!