Have you heard of the newcomer in town? Yes, Virgin Atlantic will begin to fly between Accra and London (Heathrow) on Monday! I am very excited about this as I've never flown Virgin before but only heard good things about its service. Apparently starting offers were as low as £451 for a return economy flight and later these will cost about £850. Unfortunately I don't seem able to check from Accra on the Virgin Atlantic website, but I'm sure they're office will be able to handle any queries. 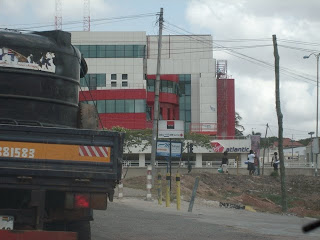 After passing the building (which is kind of opposite the Woolworths/British Airways building) and curiously watching the development it was nice to finally see the sign and realise which company was moving into Airport Residential Area. 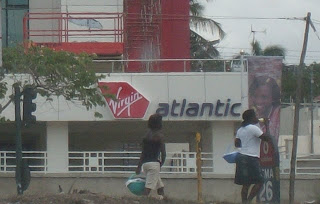 (Aren't you impressed by my driving and photographing skills?)
Posted by Maya Mame at 07:45

Virgin's flight service is good, but everything else leaves a lot to be desired. These people managed to nickel and dime me to the tune of almost $350 for a flight..... they're horrible that way. i would say fly virgin at your own peril... good service, but chisel to the max.

Wow, really? That's good to know. Maybe I'll wait a bit to hear what people say about the Accra-London flight.

Thanks for the heads up, Lady Jaye!

You got driving and photography skills Maya!

And luck too, Raine! After all that must be why none of the many yellow policemen at that junction didn't stop me!