History in the making.

This morning I woke up and after hearing the news, quickly got out my laptop to write about the sad news of Miriam Makeba's death. However it seems someone beat me to it. Hm...no hard feelings, just great minds thinking alike I guess :)

Either way, it feels like I've been living history for the past few days. Of course, Obama has a lot to do with it. But Miriam's death reminded me of how fast time is flying and the world changing with it. In 2004 I worked as a substitute teacher in Älvsborgs kommun (my home council) in Gothenburg. As I was teaching the 4th year class (9-10 year olds) I nostalgically asked them how they remember the end of apartheid. As a few hands went up I was reminiscing parties were we sang Eddie Grant's Gimme Hope, Jo'anna and Miriam Makeba's Pata Pata, then I was quickly brought back to reality when the first person who got to speak said "When we were born Apartheid no longer existed".

I discussed this with La Baselette's white South African friend (who lives down the road from me here in La) and we both agreed that it's surreal but amazing that those who are 16 years old today know Apartheid only as a segment of history! Of course it can be both good and bad, they may not appreciate historical liberty fighters in the same way as we do, but in the end it's only a good thing because it means the world has come so far. I doubt a 14 year old today knows as much about Stokely Carmichael as I do, just like someone who'll turn 14 in 2022 will not see the relevance of Martin Luther King Jr. after being raised with a black president.

Any way, before I ramble on any further, today also felt historical as I took part in the opening of the new Flagstaff house, now to be known as Golden Jubilee House. This will be the residence of the next president of Ghana. Strangely enough, until now, Ghana has not had an official residence for the leader of the country, unlike most other countries, e.g. the US, UK, Nigeria and Liberia. It was a nice ceremony with fantastic dancing from a traditional northern dance group. 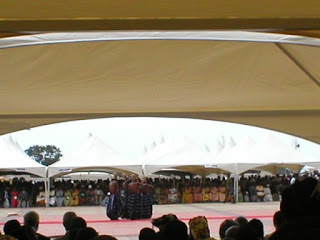 Of course, being the socialite extraordinaire, I particularly enjoyed the VIP mingling inside the palace(?), meeting and greeting Ghana's celebrities. Oh yeah, we don't have any celebs do we, rather it was me and a room full of ministers and foreign dignitaries. 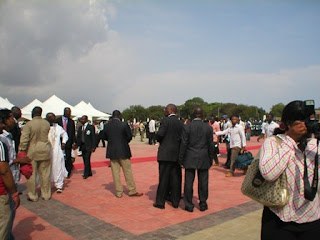 Above: In the middle with his face turned sideways, Ghana's Attorney-General, Joe Ghartey. 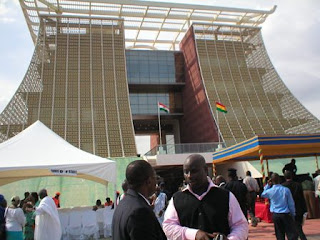 What a girl wouldn't do for a free lunch!
Posted by Maya Mame at 18:28

Maya, sad about Miriam Makeba. Totally happy that so many of them lived to see their dream/passion attained. I bet she died with that beautiful smile on her face. What a life!

Maya, great piece!
Your sense of history and its relevance is beautifully captured.
Miriam Makeba, Mama Africa,was not just South African. Many are the nations in the continent who could very well( and rightly so) claim her as their own, including our beloved Ghana.
Talking of Ghana, Golden Jubilee House as the seat of government is, in my view, symptomatic of the ever changing face of the state.
May our march forward be a smooth and happy one for all Ghanaians and those who love Ghana.
Long live Ghana!

Yes, I'm sure she died happy, Nana Yaw. She looked very vibrant at the clips from Sunday's concert in Italy.

I love your patriotism, Posekyere, it comes out beautifully! Let's all enjoy watching Ghana prosper and move forward in the next years and decades!

Thanks for the insights i the elite socialite's world. Planning to write something about the palace soon, maybe I can borrow a pic from u, dear?

Sure, no problem. I won't sue you!

Thanks Maya for the pictures! I love the architecture and the pictures, BTW I notice in the foreground a blue wall, is this some sort of water fountain?

Absolutely Miriam Makeba lived a rich and wonderful life, and sacrificed a lot for South Africa including losing a child. I am glad she lived to see the potential of South Africa. And that is why it pains me so to see Zuma elected. Such a waste!

Good eye, Sijui! It's a slanted wall with water trickling down it.

And I agree, what a shame to have Zuma in power.